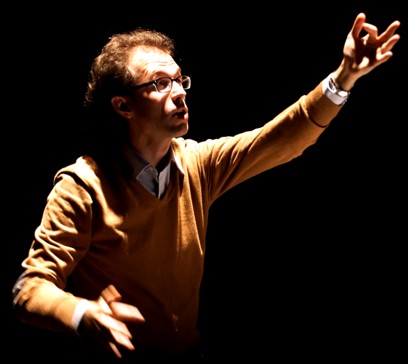 Santiago Serrate (Sabadell, 1975) began his musical education at the Conservatoire Superior of Barcelona where he studied double bass, piano and composition. He was also for a double bass pupil of Ludwig Streicher at the Escuela Superior de Música Reina Sofía in Madrid where in 1998 he was awarded a diploma (presented by H.M. the Queen) for the most dedicated student of his year. He studied conducting with Antoni Ros Marbà, Arturo Tamayo, George Hurst and Otto-Werner Mueller. He attented masterclasses of Josep Pons, George Pehlivanian, Salvador Mas and Jesús López Cobos.

He conducts the most important spanish orchestras frequently and also in Portugal, Greece, Germany Italy, China and México. His great commitment to contemporary music is very strong with concerts, recordings and 76 world premières and 24 national premières with the Modus Novus an the Sax Ensemble.

In the Opera and Ballet world he has conducted in the Gran Teatro del Liceu, Barcelona  in the Galicias's Auditorium, in Mallorca's Teatre Principal  in Madrid's Teatro Real and Teatro de la Zarzuela in Opera for Catalonia, in the Palau de Les Arts of Valencia and in the Seville's Teatro de la Maestranza, with the Ballet de Lyon and in the Theater Chemnitz. He had conducetd the first Spanish Performances of L'Ape Musicale by Lorenzo Da Ponte, il Prigioniero by Dallapiccola and Sarka by Janacek with a great succes. He had conducted and recorded thanks to a BBVA Foundation Leonardo Grantthe, the world first performance of Tomás Marco's chamber opera TENORIO in the El Escorial Music Festival. Recently he had premièred Jorge Muñiz opera Fuenteovejuna fot the Oviedo Opera in the Campoamor's Theatre with a great succes.

He is a instrument Sponsor of the Reina Sofía High School of Music. Also teaches in the "Antoni Ros Marbà" international orchestral conducting course and is musical director and patron of the Sax Ensemble Foundation.